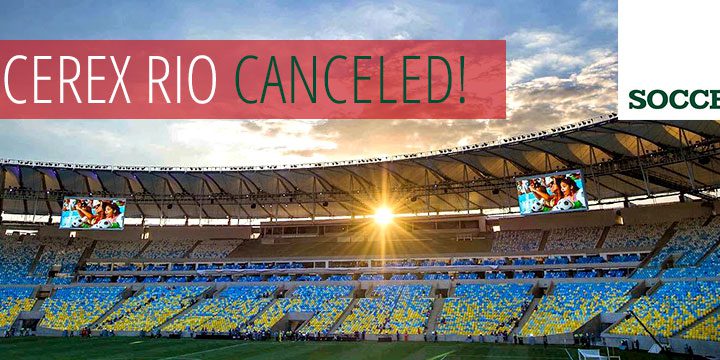 The Maracanã stadium was to have hosted the Soccerex football convention on the eve of the 2014 World Cup draw.

Soccerex, the major football convention due to be staged in Rio de Janeiro on the eve of the World Cup draw, has been summarily cancelled after it said the state government had withdrawn its support because of “ongoing civic unrest”. The decision will be an embarrassment for World Cup organisers as they try to demonstrate that the country is ready to host the tournament in the wake of the widespread protests that formed a backdrop to the Confederations Cup in June.

The news was announced on Tuesday night as the Brazil 2014 organising committee, including its ambassador Ronaldo, and Brazilian government representatives were in London to visit a tourism trade fair in advance of the World Cup draw on 6 December.

Soccerex, due to be attended by a host of leading football figures including the England manager, Roy Hodgson, immediately threatened to sue the Rio state government. Its chief executive, Duncan Revie, called the move a “unique and cruel” decision. It said the Rio de Janeiro state secretary of sport had taken a “political decision”.

However, the Rio state government said the late cancellation was due to a financial dispute rather than security reasons. “The state guarantees the security of multiple events, including New Year’s Eve on Copacabana beach, carnival, and the World Cup,” it said in a statement. “The government of Rio de Janeiro encouraged the organisers to seek cultural and sports incentives [funding] and they failed to do so. Soccerex were advised to seek funding to host the event so that the state would not have to use public money.”

The event was due to take place in the newly refurbished Maracanã stadium that will host the World Cup final next summer and was due to be attended by 4,500 of “football’s leading decision-makers” including many of the executives, coaches and functionaries who then planned to travel on to the draw near Salvador.

The Maracanã changed hands earlier this year, moving from public to private ownership when it was refurbished.

“This unique and cruel conclusion to our time in Rio was completely out of our hands and everyone who has attended a Soccerex event over the last 18 years will know this is not how we do business,” said Revie, the son of the former Leeds United manager, Don, and who launched the event in 1995 to tap into the growing global industry around the game.

“We must look forward now to 2014, to our new event calendar and the global convention in Manchester.”

The event, which also took place in Johannesburg before the 2010 World Cup draw in Cape Town, has taken place in Rio before without incident.

“Preparations for the event at the Maracanã Stadium were well advanced with content planned, speakers confirmed and partnerships in place.”

Fifa’s marketing director, Thierry Weil, said: “It’s a pity it has been cancelled – it is never good when you cancel such an event – but this won’t impact on the World Cup.”

Ricardo Trade, the chief executive of the Brazil 2014 organising committee, said that the populations of the host cities were “hungry to receive the World Cup”. “We were very happy with the results of the Confederations Cup,” he told the Guardian. “Of course, we had some challenges regarding the protesters outside the stadium. We tackled these with the federal government and the state government. They took care of this, they did a good job of supporting us.

“The people in these cities are hungry to receive the World Cup. To show the world that we are more than just Rio and São Paolo, that we have more cities to show on the coast, in the Pantanal, in the Amazon..”

Ronaldo, the three-times world player of the year, also insisted that the Brazilian people were excited about hosting the tournament. “All of us Brazilians are very enthusiastic and anxious for the World Cup to begin. It has been very hard organising work but it has also been a pleasure. We have been able to observe first hand the enthusiasm of the Brazilian people,” he said. “When it comes to the opinion polls, 90% of Brazilians consider the World Cup very important in terms of development and 70% of Brazilians are in favour of the World Cup.”

Meanwhile, the Brazilian government has formed a working group with airlines and hotel groups to try and quell fears that transport and accommodation costs will be beyond the means of many fans at the World Cup next summer.

On their visit to London, Trade said special provisions would be made to put on extra flights and reroute existing ones once it was known which teams would be playing where.

Because Fifa has chosen not to stage the group stages in geographical clusters, players and teams face having to criss-cross the vast country during the group stages. That has led to fears that flights will be expensive and hard to come by, while hotel rooms are already very expensive in some of the host cities.

“We will have strict control of these two issues, the transportation and the accommodation. We want to avoid excess,” said ambassador Carlos Henrique Cardim, the international adviser to the Brazilian Ministry of Sport.

Trade added: “Business travel will be reduced because of the World Cup, so the companies believe they can use the planes to create new flights between the host cities.

Fifa revealed on Tuesday that 72% of the 889,303 tickets bought in the first phase of ticket sales had gone to Brazilians with 9% of the total going to English fans. In the next sales window, 228,959 tickets will go on sale on 11 November on a first come, first served basis.

The final phase of ticket sales will begin on 8 December.