In Brazil, grass really is greener on other side. Will World Cup legacy be better fields? 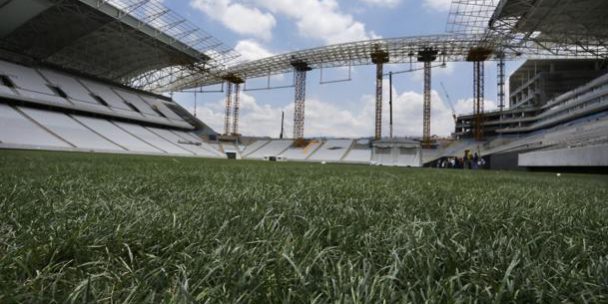 SAO PAULO – At Arsenal’s Highbury Stadium, Edu played on one of soccer’s finest fields. The team’s award-winning groundskeeper, Paul Burgess, became so noted for his green fingers he was eventually lured away by Real Madrid.

So when Edu returned home to Brazil in 2009 to finish his career, the worn and sorry state of some Brazilian soccer fields was an eye-opener. Even now, as the World Cup host rushes to ready itself, Edu says the fields in Brazil aren’t on a par with those in Europe, where he played for eight years, at Arsenal and Valencia.

“England, Germany, fantastic (fields). Spain, they’re good as well,” the former midfielder told The Associated Press. “If you see around the world, they are at another level than Brazil.”

Now retraining in soccer management and working at Corinthians, Edu says he bends the ears of all and sundry in Brazil about the need for better playing surfaces. He hopes the World Cup will drive home his message.

“I’ve always been trying to talk to everybody, to officials and to the press, and say, ‘Come on, let’s invest a little bit more in the pitch,'” he said. “We have fantastic players here in Brazil but we need fantastic pitches as well.”

“The pitch wasn’t the best, as you can imagine, although the goats worked really hard,” the 2002 World Cup winner said by email. “The club didn’t have much money so the goats were the cheapest ‘groundsmen’ you could find.”

The three-time world player of the year said he and 1994 World Cup winner Bebeto, both members of Brazil’s committee organizing the tournament, have talked to stadium owners about the importance of top fields.

“We want it to be one of the football legacies of the FIFA World Cup,” Ronaldo said. “The pitch-cost represents, on average, less than 1 percent of the total investment needed for building or renovating a football arena. However, the impact is huge, as the pitch is the most important thing for the players.”

Brazilians say having to adapt to irregular surfaces is one reason they’re often such wizards with a ball.

“That is why the Brazilian player is like an artist,” Rubens Minelli, a national championship-winning former coach, said in an interview. He recalled being amazed by Newcastle’s surface — “very fast,” he noted when he took Internacional to play there in the 1970s.

Juninho was likewise impressed when he moved to Middlesbrough in 1995.

“Unbelievable,” he said. In Brazil, “you couldn’t find real nice pitches, not as good as England.”

“I played in Wembley twice and the grass was fantastic,” he added.

Yves De Cocker, director of the field-installation company Desso GrassMaster, says Brazil has been sluggish in adopting the latest techniques. Desso has worked on dozens of fields around the world, including Wembley, the Emirates Stadium that Arsenal moved to in 2006 and other famed venues.

Plastic fibers are injected into natural grass fields to reinforce them. Three Brazilian clubs have adopted the system — Gremio, Santos and Corinthians, at its new Sao Paulo stadium hosting the World Cup opener and five other matches.

“Brazilian pitches, as they are right now in the stadiums, are not really to be compared with, let’s say, the average level or the general level that is accepted in Europe,” De Cocker said in a telephone interview.

For its new venue in the southern city of Porto Alegre, which will be a World Cup training facility, Gremio imported giant lighting rigs on wheels from the Netherlands to breathe life into a field pockmarked with bare patches when the AP visited in December.

“Half of the year we have no sun for this part, for that part,” Gremio operations director Romulo Siqueira said, pointing at the stadium ends.

At least Gremio has a field. The World Cup arena in Curitiba was more alarming: not a blade of grass to be seen, earth and gravel piled high, six months before four matches will be played there in June.

De Cocker expressed concern that World Cup fields might not fare well under the stress of multiple games in one month. At the smaller Confederations Cup tuneup competition last June, he said almost every field had “serious problems.” He doesn’t think climate has much to do with it.

“It is a learning curve,” he said. “The only problem is that everybody, I think, I guess, would expect (Brazil) to be already further down that learning curve than they are now.”

Ronaldo agreed that most of Brazil’s fields cannot yet be compared to the ones in Europe.

“But this is changing and I am confident we’ll get there,” he said.

A new concept for the sports pitch market
April 9, 2021
Go to Top