Hybrid pitch for the new Océane Stadium of Le Havre 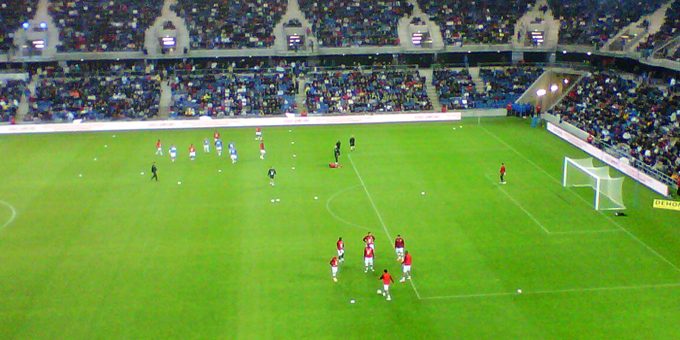 The new stadium of Le Havre, the home of HAC will have a Desso GrassMaster pitch, a natural grass pitch reinforced by artificial fibres. The 25.000 seats stadium and its pitch will be inaugurated on July 12.

With its special ETFE roof construction in blue, the colour of the home football team HAC, the stadium is a true eye-catcher.

Thanks to its 13.000 m² photovoltaic panels, incorporated in the roof, the stadium will be the first in France to provide energy rather than to consume it, The stadium will be a multi-purpose venue. In addition to football and rugby matches, it will also host events such as concerts..

Thanks to the system, the stadium can fulfil its double role as home of football and rugby matches and at the same time host events.

Alain Belsoeur, Director of HAC: «The conurbation of Le Havre ( CODAH), the contracting authority for the construction of the stadium, has approved the proposal of HAC. to equip the state-of-the-art stadium with a Desso GrassMaster pitch. The system enables the multifunctional purpose of the stadium, designed to be accessible to and of use for everyone. The choice for this system underlines our decision to select the suppliers with the best references on international scale».

The system has already proven its reliability at the highest level. Premier League clubs such as Manchester City, Arsenal and Liverpool play on a Desso GrassMaster pitch in their stadium.

In France, the stadium of Nantes FC and the training centre of AS Monaco have a Desso GrassMaster pitch.

At Euro 2012, the system proved its quality, by providing a perfectly playable surface for the match Ukraine- France, in less than 20 minutes after the Donbass Arena in Donetsk was hit by a thunder storm with heavy rain fall.

A number of matches during the FIFA 2010 World Cup in South Africa was also played on Desso GrassMaster pitches.

Since the installation of the Desso GrassMaster system in 2010 in Wembley, the stadium has a perfect pitch again. In 2011, more than 60 sports events and 8 weeks of concerts were organized. During the Olympics 2012, Wembley will host 9 football matches, including the semi-finals and finals in less than 2 weeks time .

Desso Sports Systems is the international leader in innovative sports fields for football, rugby and hockey as well as tennis courts and multifunctional fields. Over time, the company has installed more than 50 million m² of artificial turf and hybrid grass at both amateur and professional clubs all over the world. Desso Sports Systems is a FIFA Preferred Producer for football turf.

Desso Sports Systems is part of Desso, well known for contract carpeting and carpet tiles for offices, public buildings, schools, hospitals and airlines. Sustainability and creativity are important key values that become part of the design and the Cradle-to-Cradle objectives.