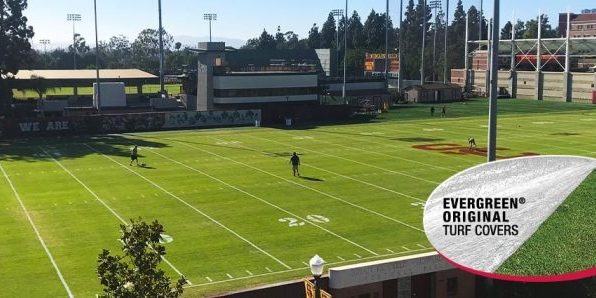 Though the University of Southern California (USC) is no stranger to the benefits of using turf covers on their home field in the Los Angeles Memorial Coliseum, they recently decided to invest in EVERGREEN® for their practice fields as well.

In early May, three new EVERGREEN® Original turf growth covers along with TARPMATE AIR® rollers arrived in plenty of time to prepare the practice fields for the university’s upcoming football season. New growth covers were also delivered to the Coliseum, updating an older set of EVERGREEN®  turf blankets. EVERGREEN®  Original has been setting the standard since 1985, creating a greenhouse effect as it allows sun, air, and moisture to reach the turf while releasing excess heat.

Scott Lupold, the Coliseum’s sports turf manager and head groundskeeper for the LA Rams, has had great success using EVERGREEN® turf blankets. “We used to have two teams using our field, which means that we needed a way to accelerate the turf’s recovery. Our COVERMASTER® EVERGREEN®  turf blankets provide that solution for us, evoking a magical response in the grass.”

“The covers trap heat, resulting in the air underneath the cover to be as much as 20°F (11°C) warmer than the surface air, allowing healthy grass to push through damage in cooler weather and gain 1-2 days of growth,” he added. “The covers provide a drastic boost in the condition of the turf and I would definitely purchase them again.”

Q&A: COVERMASTER’S KEN CURRY(Posted by TheStadiumBusiness on 22nd July 2021)
July 29, 2021
Are you looking for something?
Recent posts
Categories
Go to Top