SOCCEREX DELIVER NO. 48 – THE GLOBAL EVENT FOR SOCCER IN THE AMERICAS 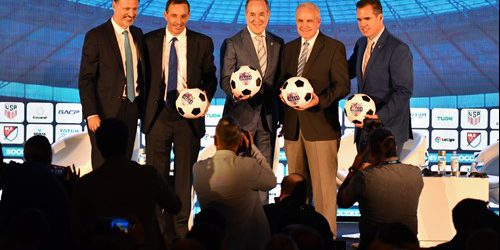 Soccerex returned to Miami last week, to successfully deliver Soccerex USA 2019 – 21-22 November, their 48th event in more than two decades and established as the leading global platform for soccer business in the Americas.

Hosted in partnership with Concacaf, MLS, US Soccer, the Mexican Football Federation, NWSL and USL, and with the support of Global Partners LaLiga, Oeiras Valley and Totum Sport, and event partners TUDN, the event saw 1723 soccer professionals from across the globe gather at the impressive JW Marriott Miami Turnberry resort for two days of knowledge sharing, networking and business.

Attendees were able to meet with 72 different companies in a packaged exhibition and learn from over 100 expert speakers who provided 16.5 hours of analysis and insight in a programme that focused on the growth of soccer across the region.

All five continents were represented at this impressive international event, with attendance split 60/40 in favour of the participants from the Concacaf and Conmebol regions compared with the rest of the world. This was reflected in a programme where preparations for the co-hosting of the FIFA World Cup 2026 across the United States, Canada and Mexico was a consistent thread and in which Miami launched the next phase of their campaign to be one of the 16 host cities for the tournament.

The conference also looked at the growth opportunities for the domestic game in North, Central and South America – part of a strong focus across the programme, and the event as a whole, on the needs of soccer right holders, with more than 450 club, league and federation representatives in attendance and speakers from top brands such as adidas, Budweiser, Dunkin Brands and Target.

Industry leaders were quick to acclaim the quality of the event’s programme and networking opportunities:

“Brilliant! I’ve been really impressed with the level of diversity on the panels and the topics” Darren Eales, President, Atlanta United

“Amazing! …to be able to partner with such an amazing organisation that is a voice for football in our region.” Karina LeBlanc, Head of Women’s Football, Concacaf

“I think Soccerex is one of the best networking opportunities that we have in this country for our game” Chris Wright, CEO, Minnesota United

Soccerex USA completed the company’s event schedule for 2019; a year which saw continued a presence in China and the US and a first event held in Portugal, aimed at the European soccer community. These three tent-pole events in the world’s key football markets – China, Europe and the Americas – will underpin Soccerex’s strategy for 2020 and beyond, under the leadership of GACP Sports, aimed at growing a market-leading position, through the offering of high-quality events, programming, and connectivity to the global soccer, business, and wider sporting communities.

2020 is also a special year for Soccerex, with April 23rd marking the beginning of the company’s 25th year of operations; a landmark it shares with partners MLS, and there will be a yearlong program of celebrations, including its 50th event, leading up to the 25th Anniversary in 2021.